Beto O' Rourke was the first Presidental candidate on the Democrat platform to promote gun confiscation, but now almost all the other candidates have joined his chorus line.  During a recent Democrat Presidential Debate, CNN asked the question, "...exactly how are you going to take away weapons from people who do not want to give them up?"  Beto response was classic, and perhaps more importantly...against the law:

"That weapon will be taken from them.  If they persist, there will be other consequences from law enforcement" - Beto O'Rourke

Elizabeth Warren echoed Beto when she said, "We need to treat gun control like the public health emergency it is."   Warren has gone further and started to present what the press calls "Sweeping new control plans."    The Washington Examiner called Warren's plans "either is terrifically stupid or terribly cynical."

Without digging all the quotes up, its easy to do an Internet search and find that all the other Presidential candidates have jumped on board with the "Gun Confiscation" as well.   They appear to be chanting this Gun confiscation propaganda to large crowds. These people are either "Hand-picked and directed people" or very poorly educated people with no concept of the Second Amendment. These same people must not understand the economy that surrounds guns and the large number of Americans who own guns and use them legally and responsibly.

For the most part, past Republicans and Democrats have agreed on gun control issues and gun ownership rights.  A quick run-through gun laws enacted - the first ones came around the mid-1930s - a person can find Democrats and Republicans working together.  Some Republican Presidents have signed legislation, and some Democrats have signed the legislation.    Whether that legislation has been accepted and appreciated by the individual party members could be debated.  The agreement between Democrats and Republicans on guns is no longer in agreement.  While Republicans have maintained that laws are needed and that people barred by law or mental issues should not have guns or access to them, the party has affirmed the right of the law-abiding citizen.  Democrats have now targetted not only people barred by the law and with mental issues, but they are also aiming at law-abiding citizens as well.   A further concern now has to look at the language.  Democrats are no longer picking specific guns to confiscate or outlaw.  Now they have started to use the term "weapons" or only "gun."  Those terms are extensive in their implications.  Democrats could mean they are only going to target automatic weapons, or they could mean semi-automatic, single shot, or event black-powder, single-shot weapons.

If one of these Democrats gets elected in 2020, you can bet the first parts of legislation to hit the ground come February of 2021 will begun confiscation.   Democrats who do not win the nomination and remain in Congress will hurry to push through new bills so their Democrat President can sign off on his or her promise to...well, to put it blunt...to take your guns.  Make no mistake, the more Democrats in Congress, and if a Democrat is President, they will use those numbers to push whatever gun confiscation laws they want right on through.  A Democrat majority could and will destroy your Second Amendment rights, and they will send someone to your door with orders to take your guns.  If, for some reason, you don't believe this can happen, then you may want to consult with your doctor - especially one of the hundreds of physicians, nurses, medical staff, and Republicans that warned not to pass the Affordable Healthcare Act. Despite expressing their views and professional opinions, they had to sit by helplessly as a Democrat Controlled Congress, and President gave America a new law requiring healthcare insurance and giving fines and penalties to those that refused to follow the law.  It happened then, and it can happen again.  The problem is that this time it will not be your health on the line, it will be your ability to defend yourself that is removed.

Under the headline "Slaughter in Syria," ABC World News declared that people were being killed in Syria since President Trump withdrew U.S. troops.  The news featured a clip of machine guns being fired, blast and flashes of light in the night, and what appears to be a complete and horrible killing in Syria.  ABC continued their on-going biased attempts to attack the President publically with their huge news, viewer base.  The problem...ABC news lied.

Within a few hours of the post, several other news outlets noted that the dreadful attack on the Syrian people looked familiar. It not only looked familiar, but it was also actually the footage of the Knob Creek Gun Range's annual machine gun shoot.  The shoot, described by many people on social media, is a wonderful opportunity for the public to witness fully automatic weapons fire and see some explosions.  The event is conducted every two years under strict supervision and for the public enjoyment - think the equivalent of an air show or tank demonstration.  Consequently, no Syrians were killed by the presentation.  It should also be noted that while no Syrians were murdered, the fact is that during the demonstration, from 2017, by the way, nobody suffered from the "fury of the Turkish attack" - credit 10-13-2019 ABC World News Tonight, and 10-14-2019 ABC Good Morning America.

By mid-Monday evening, the world was hearing the apologies of ABC.  They expressed how they were sorry for the mistake, took down the footage, and they posted, "We regret the error."  No, ABC News, I do not think you "regret" anything.  ABC News is a worldwide, multi-billion dollar news and media company with hundreds to thousands of employees.  They are educated, trained professionals in the field of communication and news reporting.  These employees know the difference between "News," "Opinions," and outright "Lies," essentially equalling "Fake News."  An apology to the President, to the American people, and to the world that watches ABC is not enough.  Yes, we have freedom of the press, and it is a beautiful gift here in the United States, but that freedom does not give you the right to Lie and create Fake News.   What you have done is deceptive, dishonest, and deplorable.

If you want to hate the President and his policies, okay...that's your right.  If you're going to voice your opinion about it, fine...create a blog like this one, or at least list a view in the "Opinion" section of your news.  But if you want to create Fake News and Lies, then you deserve the onslaught you've seen on social media. In truth, you most likely deserve a review of your license through the FCC at a minimum.  Shame on you for taking a responsibility to provide unbiased news!  The one positive about all of this fiasco is that you, ABC World News, has once again proven why Americans overall have more faith in President Trump. When the President calls you "Fake News," you have given one more example to support his statement.
Posted by That Writer at Tuesday, October 15, 2019 No comments:

If you are like me, then you were extremely frustrated this morning when the announcement came about President Trump's taxes. A judge, appointed by Bill Clinton, ruled that Trump has to turn over his tax returns to a New York DA. Consequently, that DA is another Democrat. The order covers taxes back to 2011.   The IRS has already stated that Democrats are trying to weaponize Trump's tax returns.  I have to say, I agree with the IRS and many other assessments.  It merely seems like the Democrats are trying to attack Trump on any point they can muster up even down to his tax returns.

Naturally, Trump's lawyers are already in the process of filing an appeal to the recent "Democrat Motivated" move to obtain tax returns.  Democrat's failed in Congress to get the returns, so they have targetted two states - New York and California.  California actually passed an unconstitutional law that requires a Presidential candidate to release his tax returns.  Notice what I said there by the way, "Unconstitutional."  Nowhere in any law is a presidential candidate, much less a candidate for any office, required to release his or her tax returns.  Democrats simply hope to find some error, some mistake, or maybe the fact is that Trump had so many business deductions he paid low taxes.

Consider this for a moment - what if the Democrats do get Trump's returns? Maybe he did pay low taxes, or there is some other mistake in those tax documents. What does it all mean? It's simple; it means that there was a failure and someone failed?   When you're a billionaire, you usually don't sit down at the table and complete your tax returns on April 14 and run to the post office and get them off to the IRS.  When you are a billionaire, you have tax information all year long.  Before Trump was President, that is precisely what he was doing - running businesses.  So, he was not the guy sweating at 7:15 p.m. on April 14, trying to finish his taxes.  So if there is a mistake in Trump's taxes, who do you think is to blame?  Well, here's a list for you:
1.  The office staff handling the return information such as deductions, cost, and income.
2. The accounting firm handling Trump's taxes would be the first to make a mistake.
3.  The state income tax in New York or whatever state the business files in would be liable for an error they failed to catch.
4.  The IRS - they reviewed, stamped, and accepted the returns.  If they had a problem with them, then they would initiate a review or audit - otherwise, they are accepted and not even considered after seven years.

Even if by some Democrat, Magical Blessing, Democrats do obtain Trump's tax returns, it is highly unlikely that any mistake made would be directly attributed to him.  He pays people to handle this daily, and those people are professionals with liability insurance - yes, insurance to cover if THEY make a mistake.  Whether you like Trump or not, he is a billionaire, and like others in business and money, he has precautions in place.  Again, he is simply not the guy sitting at the table on April 14, trying to get that envelop to the post office.  Any review of Trump's taxes and any mistakes which may be found is ultimately going to show that someone made a mistake. It will show that either an employee, accountant, state employee, or a federal employee made that mistake.  It is not going to be an error that Trump personally made so the Democrats could plaster it all over their campaign posters.  I guess you do have to applaud the Democrats for trying...after all, none of their other lies about Trump are being bought by the American people.

The following Press Release is from the Miller County Republican Committee: 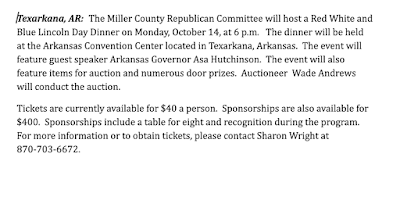