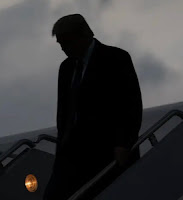 In the now-classic film Lord of the Rings: The Two Towers, the king, and his followers are all alone in the final battle when help arrives.  You may remember that in the final minutes of the battle, the king decides with his advisors to ride out and face the entire enemy army alone.  It's certain doom, but it's also the last chance to give his people hope and at least allow some of them to survive.  In those final moments, Gandalf arrives with reinforcements.  He makes a comment, "There stands the king alone," to which the response is "He is not alone."  The troops are then encouraged with the battle cry "To the king."  As you know, the rest is history as they soundly defeated the enemy and won the battle.  ( https://youtu.be/EApCLbgAE5E).

As we come to the close of the 2020 election, we find November 3 quickly approaching.  We also find President Trump in much the same position as the king in the Lord of the Rings.  According to almost every poll, the media, the various newspapers, the Internet, and the Democrat party, the President is without hope.  For an election, this means they believe he does not have the support in votes to win.  The expectation is that the Democrats will have a tide of voters and that President Trump will be voted out of office.  When you listen, it's not hard to imagine Gandalf saying, "There stands the President alone..."

At this moment, we, the voters, the silent majority, represent the army that arrived with Gandalf.  We have a clear choice.  We can retreat, hide in our homes from COVID and other fears, allow those who would intimidate us into shaming us into hiding, or we can declare loudly, "To President Trump" by voting.

Make no mistake, friends... the Democrats have an army.  They are banging on the White House gates, and in the eyes of much of America, President Trump is almost standing alone.  Yes, the rallies have been great, the campaign headquarters are doing well, and there are boat parades and vehicle parades across the country, but that does not translate into votes.  The army that arrived in the movie looked good.  They rallied well, paraded well, and looked fantastic, but it was not until they wielded their weapons that they became great.  Your weapon is your vote.  Use it.  Cast it for Trump.  Vote.

If on November 4, we wake up to the news that Trump lost, let it not because we failed to go to him in his hour of need.  He has stood for America for four years.  He has fought the fight, sometimes alone, for four years for you.  He has worked, been attacked, fought off false impeachments, attacks on his family, attacks on his character, and he has fought against lies.  According to the news, he now "stands alone."  Will he stand alone, or will you charge to the polls with the cry, "To the President?"  If you do, no matter what happens on November 3, you will have fought the good fight and stood by President Trump. 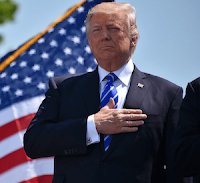 If you watched the debate, you are likely to have noticed that former Vice-President Joe Biden made at least a couple of references to COVID-19, causing a "Dark Winter."  Like many Americas, I initially thought very little of this reference, but then it began to pop up all over the Internet.  What becomes even more alarming about the comments is it actually references a government operation from 2001, a time Biden was very much involved with the government.

Dark Winter was said to be conducted in 2001 from June 22-23.  The operation was a practice or mock exercise in the "What if" preparation for a pandemic of a smallpox attack on the United States.  The bottom line is that the operation was designed for practicing what might happen in the event of a pandemic attack of any kind on the United States.  Several private institutions such as John Hopkins Medical and others participated in the exercise and provided reports, statistics, and feedback to the government.

While we certainly do not want to fall into a conspiracy theory group here at Texarkana GOP, the fact that Biden chose these words indicates that he expects one outcome.  Biden was trying to imply that more people than expected will die from COVID-19.  One thing is certain, the public can easily search "Dark Winter" and see the experiment information for themselves.  Biden seemed set to use fear, death, and disaster as the cornerstone of his campaign.  The message was clear, "Vote for me, or you're facing death and destruction."

Fortunately, President Trump has had a clear and decisive plan all along.   When Joe Biden was yelling that President Trump was promoting fear, Trump was closing travel, setting plans in motion, having teams study the virus, and keeping the American people informed.  President Trump said many times that the deaths were projected to be over two million and that "One death from the China virus is too many."

A Democrat President during the darkest hours the United States faced during the Great Depression when people were starving, hurting, and crying out for help,  said to the American people, "We have nothing to fear, but fear itself."  That President projected calm, a plan, and pushed forward...America survived.  President Trump is following in those footsteps of great Presidents...he is projecting calm and reassurance.

Remember, President Trump himself has faced the enemy and won.  COVID-19 struck at the leader of the nation, and he bounced back.  In the middle of continued attacks from Democrats, the loss of his brother, a full-blown political campaign, rebuilding a country, and trying to help people, Trump faced one of the deadliest pandemics we have seen in a century.  Like he has encouraged us, he faced it unafraid and overcame it.

Posted by That Writer at Saturday, October 24, 2020 No comments: 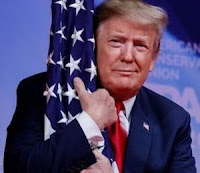 Early voting has started in most places, and November 3 is right around the corner.  To put it bluntly, it's fourth and long, and we're down by a touchdown.  Polls show Biden has an eight to ten-point lead.  His lead is holding in battleground states.  November 3 is going to be a long night of watching results, praying, and hoping that America will not fall into the hands of a party with Socialist, economic destruction, and "Tax and Spend" plans coming.  Your time is now...it's Trump Time!

If you believe America is great and it can still be great, then you have a duty, an obligation, a calling, a requirement to get up, get out, and vote.   Your voice must be counted.  The Christian, the independent, the Republican who supported another candidate, the lover of American, the gun owner, and the right to life supporters are now needed.  You can not stay home and watch the elections pass.   You must vote.

On November 4, Americans will wake up most likely to know that either Joe Biden will be President or Trump will serve us for another four years.  We have two choices standing in front of us.  One choice will offer a dark, clouded, and uncertain future filled with next taxes, gun restrictions, and a socialist agenda.   The other choice offers a bright future with economic growth, continued focus on rights, a continued agenda that says America is still the greatest country in the world.  I want to wake up with a feeling of hope with that bright future.  What do you want to wake up to on November 4?

Posted by That Writer at Wednesday, October 21, 2020 No comments: