Kamala Harris and Her Mission for Political Correct Virus Names 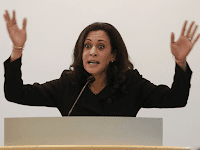 Well, Kamala Harris is once again seeking little attention, folks.  If you remember, she is the former Democrat presidential candidate who claimed, "My failing campaign shows America's not ready for a woman of color as President."  Naturally, in her great claim to point the finger at all Americans, Harris failed to mention that only Democrats had been voting for or against her at that point in the primaries.  She also failed to point out that those same Democrats overwhelming pushed for Obama to the nominee twice and for Hillary to be the nominee last time.  Somehow, and suddenly, just three years after the party hailed Hillary (Yes, a woman) as the number one choice for the Democrat party, Harris decided that she was not being nominated simply because she is a woman and a woman of color.  Well, whatever helps you sleep at night, I guess.  Unfortunately, that little attention-seeking stunt was not enough.  Now Harris is at it again.

What else could Kamala Harris do?  Well, she needs to stay in the spotlight, so maybe Joe Biden will select her as his running mate.  After all, if Joe remembers which is a really easy debate to initiate, he said he would select a woman for his VP ticket.  So, Harris has decided to introduce new legislation.  It's not bad enough that she appears to feel anyone not voting for her is prejudice...you know, all those Democrats that did not vote for her...now she wants to push these distorted types of beliefs on the rest of us. The act of a few people deciding what is politically correct and what is not politically correct seems to be something Democrats love to do.  So, in the excellent fashion of a Democrat, Harris has introduced a resolution that would declare it racist to call COVID-19 the "Wuhan Virus" or a "Chinese Virus."

Harris' actions must prompt an eyebrow rising from at least loyal Democrat voters as they wonder why one of their representatives seems to think defending a Communist Government and country is more important than America's freedom of speech.  "Wuhan Virus" or "Chinese Virus" is not a racist slur.  In fact, these statements are simply a fact.  The virus that now plagues most of the world came from the Wuhan area in China.   It's not a racist statement.  Apparently, Harris is more concerned about introducing her resolution to defend China than she is about helping the Americas in need.  To make a comparison, if the virus originated in Texarkana, I would see no problem in calling it the "Texarkana Virus," but it did not...it began in Wuhan.  So, we refer to it from the area where it started or was first reported.

Harris' resolution is merely uncalled for, failing to focus on Americans who are hurting, and a waste of Congressional time when we need them doing anything except wasting time and money on silly resolutions debating names for a pandemic virus.  But, if she is going to go down this road and make resolutions for viruses associated with places, she has a long road to go, and she had better get started.  I'm sure that is precisely what the voters in her district want...more political correctness.  So now that Harris has tackled the "Wuhan"..err, I mean "COVID-19," maybe she can pick a few out of this list next.  I would suggest any associated with the United States first...just saying:

Yes, Kamala has work cut out for her now...