His name was Bernell Trammell.  He was an American.  He was a business leader.  He was an African-American man.  He was described as kind, polite, and always out and about.  He had friends, family, and associates around the town.  He was also a Trump supporter, and on July 23 in Milwaukee, police now believe that is what cost Mr. Trammell is life.

You read correctly friends.  Police now believe that Bernell Trammell was killed due to his support of President Donald Trump.  Ironically, Trammell is not what you would call a "Die-Hard" Republican though as he also supported some Democrat candidates.   He sounded like the kind of man that looked at the candidate more than the party.  Whatever the case was, he held signs supporting President Donald Trump and promoted the President.  Now, Bernell Trammell is dead.

The efforts of those opposing President Donald Trump to silence the rest of Americans have been questionable and most likely outright harassment up to this point.  People have had MAGA has slapped off their heads or taken, people have been called racist, yelled at, and some have even called for physical harm against Trump supporters.  American politics has looked more like an episode of "COPS" than a political system built on the honor and dignity of a Republic.  Now, that other side has resorted to murder.  When yelling curse words, calling us names, destroying property, busting into headquarters for campaigns, and outright harassment and intimidation did not work...they have now decided that a few killings might silence the rest of us.

In the words of the famous English Idioms "You done gone and done it now."  We will not go silent, and in fact, social media has come alive with hashtags like #JusticeforBernellTrammell and others.   No, see, you will not scare us into not voting or not supporting President Trump.  We will not hide away our signs, hats, and banners.  Rather now you have shown us by your actions that your intimidation knows no bounds.  Yes, you have certainly done gone and done it now - You have awakened every Trump supporter from the hills of North Carolina to the streets of Texas, from the ranches and farms to the business rooms, you have awakened an army.  From Maine to Arkansas, to Washington state and Alaska, we will turn out.  Trump flags will fly, Trump signs will be planted, and Trump hats and shirts will triple in numbers.

You killed Mr. Bernell Trammell, a man with home-made Trump signs and a small area of influence in Milwaukee.  He had little influence outside his circle, but now we know his name.  Now we know what you have "done gone and done."  We know that there are simply no limits to what you will do illegally to silence us.  You have silenced one....now you face millions and we will not be silenced now or in November.

President Tweets Out to Texarkana 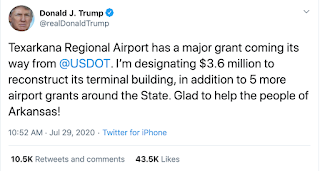 President Donald Trump mentioned Texarkana in a tweet on July 29.  The President spoke of several grants and economic improvements being presented around the country.   This may be the first time a sitting President of the United States has ever mentioned Texarkana, Arkansas in an official tweet on social media.

In the "Texarkana Tweet," the President specifically discussed the grant for the Texarkana Regional Airport.  There are currently six grants being presented by the government to Arkansas for airport work.  The Texarkana grant will provide 3.6 million to reconstruct the terminal area.

As of this morning, the tweet had over 10,000 retweets or shares as it is sometimes called, and over 43, 0000 "Likes."  Several people on social media had shared the tweet and discussed it in the area.  Naturally, friends and supporters of the President expressed excitement at being recognized by the President's private Twitter account.

President Donald Trump specifically noted that he was "glad to help the people of Arkansas."  Well, Mr. President, if you happen to stumble across our little article, our airport affects people from  Texarkana, Texas, and Arkansas, and people from Southeast Oklahoma and Northwest Louisiana.  We appreciate the grant.  We appreciate the shout out on Twitter.  However, most importantly, we appreciate all you are doing to Keep America Great.  Thank you, and God Bless you from your friends and supporters in Texarkana, USA. 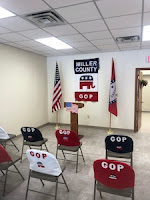 The headquarters will be open Monday through Saturday from 9:00 a.m. to 5:00 p.m. daily. According to the Headquarters Committee, the hours will extend the closer to the November election date it gets. The headquarters telephone number is (870) 648-1071.


Volunteers and committee members will be on-site for visitors wishing to view the headquarters and obtain campaign material. The headquarters will feature Trump hats, shirts, signs, and other materials for the upcoming 2020 election. 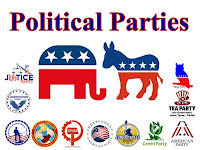 Unless you are directly involved in politics, you likely have given little thought to your party affiliation.  You may claim to be a Democrat, Independent, or a Republican simply based on your voting history or views, but as far as formally declaring your party, few people do.  A search of most registered voters in Arkansas, for example, will reveal most are members of the "Optional" Party.  That simply means the person has no declared party.  In fact, unless you go down to the clerk's office and declare yourself a Democrat, Republican, or another party, you are likely listed as "Optional" Party.
Once you become involved in politics, you likely declare your party.  Young people will going groups like "Young Democrats" or "Young Republicans."  Adults will join groups like the Miller County Republican Committee or the Miller County Democratic Party.  Many of them will then contact the clerk and make sure it clearly shows on voter registration a Democrat or Republican.  This is usually done when someone wants to be active, run for office, or work for a specific campaign.

Whether a person is a "Claimed" Democrat or Republican based on voting history or a declared party member or voter, at some point, that person made a decision.  Sometimes people join the party of their parents, grandparents, or a close friend.  At other times they join a party based on the current president or an elected official.  Whatever the reason, people become Republicans, Democrats or Independents either officially or unofficially.

One of the chief complaints seen by all parties is when a long-standing member of the party decides to change parties.  It may be a voter changing party, a potential candidate for office, or an officeholder who chooses to switch parties.  Ultimately, there is only a handful of reasons to change a party...in fact, there are only three.

The first reason to change a party is that it's not your party.  Maybe you grew up as a Democrat, but you've always supported and liked Republicans.  Maybe you like their platform and agree with it more than the Democrat platform, but mom and dad were Democrats, so you claim or declare that party.  One day you come to the realization that you're only a Democrat because of your parents, and you decide it's time to join the Republican Party.  So, your change comes because you realize it was never your party.

The second reason to change a party is that the party leaves you behind.  Maybe you have been a Republican all your life, but you find that the platform of the party no longer agrees with your beliefs.  You look at other platforms, and you see the Democrat platform is more in line with your way of thinking.  At this point, you change parties because your current party left you behind.

History is full of people changing parties.  I know of one potential candidate that has been an Independent, Republican, Democrat, and back to Republican while running for office.  That candidate has never won an office.  Many supporters of Ronald Reagan are surprised to learn that he was once a Democrat, but it's true, and he changed parties.

In the end, the change to a different political party simply puts money into that party's account.  Those filing for office pay the party, those wishing to join local committees or parties pay money, and donations often increase when that party is popular.  The only real way to know if the candidate or citizen is truly a Democrat, Republican, or Independent is to watch the way they vote, where their support goes, and if elected officials, how they vote, represent, and what legislation they support or introduce.

In recent years, Arkansas has seen a good number of Democrats change to the Republican Party.   This change has upset some long-standing Republicans.  Those Republicans have expressed concern because they feel like these new Republican converts are merely joining the party to win votes, and that may be true.  However, Republicans must keep in mind that some of these new converts may also have seen the changes in the Democrat Party and decided they do not like those changes.

For the time being, all the Republican Party can do is accept filing fees, support the Republican candidates and monitor the candidate after he or she is in the office to see if that candidate supports Republican initiatives and pushes the platform and party views.   Only time will tell if a Democrat becoming a Republican is a real change or merely a wolf playing in the field of sheep.
Posted by That Writer at Wednesday, July 08, 2020 No comments: