The Trump Assault and What it Means for You 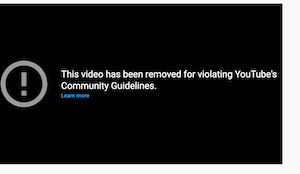 It has now been over four months since President Trump left office and the assault on his free speech continues.  Saturday, the President returned to the stage to make a political speech in North Carolina. The news shared it, and for the most part, it was a standard, post-Presidency type of speech made to the party.  It is not unusual for a former president to speak to state parties, national parties, or national conventions.  These speeches are recorded, kept for historical purposes, shared for the party, and almost always placed on YouTube.

If you doubt a former president's speech is on YouTube, you know because it may violate their content rules, do your own search.  A quick search for Bill Clinton found the former President's speech to the Democrat National Convention (speech here) easily accessible.  Apparently, the same rules do not apply to President Clinton as they are applied to President Trump.  Trump's speech was on YouTube until recently.  In fact, you can attempt to find Trump's speech (speech was here), and all you will find is "This video has been removed for violating YouTube's Community Guidelines."

You may not like Trump, and that's okay.  You may not like Clinton, and that's okay.  The wonderful thing about the United States and our freedom of speech is that we can all decide if we want to listen or not to any person.  We can decide if we want to be a Republican or Democrat.  Part of that decision-making process comes from being exposed, learning, and making informed decisions based on different ideas and views.  We learn and make those decisions about politics by hearing, reading, and agreeing with a person or party on issues.  If the views presented agree with our own views, we may become Democrats or become Republicans.  However, when that information is not available, it becomes a problem.

Even if you hate Trump, you should be worried when a corporation that promotes videos with all sorts of opinions and views decides to cut out a political video it does not agree with and say it violates "community guidelines."  You should be concerned because corporations change, and boards of directors change.  Anytime leadership changes, views may also change.   When you limit or refuse to allow a political view in a public forum, you walk a dangerous line that comes close to what we see in other countries.   One view may easily be discarded or deleted today, then a view you support may be just as easily discarded tomorrow.  When anyone's political views are discarded in public, then freedom is threatened for all of us.