Last night at the Democrats debates the question was presented as to how many of them would support healthcare coverage for illegal immigrants.   This may come as a shock to veterans who are trying to get the healthcare benefits promised to them when they signed up to serve.  It may also come as a shock to small business owners struggling to pay taxes and maintain healthcare insurance.  It may come as a surprise to the young worker with no healthcare benefits at his job who happens to also make just a little too much money to have government subsidized healthcare.  It may, in fact, shock a lot of people, but out of all ten Democrat candidates, every single one of them raised their hand to support healthcare benefits for illegal immigrants.

Ok, here we go - Illegal Immigrants is a person who comes to this country illegally (gentle reminder, illegal means against the law).  This person attempts to cross borders, fly, drive, or walk into the country without authorization.  We understand that some of these people are fleeing from a bad government - you know, this is usually obvious as they fly the flag of the country they are fleeing from to us.  Anyway, this person decides to sneak into the United States, defy United States Immigration laws - the laws put in place and operated for years by both Republicans and Democrat administrations - and they simply snub their noses at U.S. law.  They intend to enter the country by any means whatsoever and they intend to ignore U.S. law to do it.  That is an illegal immigrant.

Now, here we go again - Legal Immigrant is a person who comes to this country and applies for stay maybe through a student stay, a work stay, or some other avenue.  He or she decides they love this country - I know, what's not to love, right? - and they decide they want to stay.  This person then takes classes, studies, learns about the United States and the laws of the United States and he or she applies and becomes a citizen of the United States.  This person can now vote, run for office, participate in the business, and work all "legally" in the United States.  He or she can travel freely and without fear of deportation across the nation.   They are not in a nation no longer as an immigrant, but they are in the nation as a citizen.   I personally know many of these "legal immigrants" and do you know what they are most proud of?  Do you know what they say is their greatest pride about being here?  They are most proud to be a "Citizen" of the United States of America.  They are proud to abide by the laws, participate in elections, have a voice in government, and support their fellow citizens.  They honor veterans - many of them being veterans - they honor the flag, they honor "Our" country, and they cling to the American flag often with more pride and love than some natural born citizens do!  That, my friend, is a Legal Immigrant and the person you want next door and standing next to you when and if the going gets tough in America!

Your Democrat candidates have gone off their rockers!  They are trying to convince Americans that the word "Illegal" is somehow good and worthy of attention.

I will leave you with one final thought for consideration.  If a person will assume the status of an illegal immigrant to enter the United States, do you really think that person will honor and respect the laws of this country when they get here since their very entry was based on an illegal action?

Have you ever noticed how the Democrat Party is constantly saying President Trump is lying?  In fact, the Democrat party continues to accuse Republicans at large of lying, distorting facts, and misleading people.  It's an interesting phenomenon called "Psychological Projection".   According to Wikipedia, Psychological Projection occurs when one person projects his or her guilt or issues on to someone else.  The example given is "a person who is habitually intolerant may constantly accuse other people of being intolerant."  At the very basic level, it is "blame shifting" and Democrats have become masters of this deception that essentially equals lies and distortions.

Consider just a few incidents from the last couple of hundred years.  The Republican Party was formed to abolish slavery.  Democrats wanted to maintain slavery and even incorporated it into their reasons behind the Civil War.  However, Democrats attempt to blame Republicans for the issues of slavery.

Sadly, it appears that the Democrat lies and distortions will do nothing but continue into this new generation of Democrats.  Even the young generations of Democrats in Washington seem bent on continuing the proud Democrat tradition of deception.

Consider, yesterday an accident occurred at an oil refinery in Philadephia.  It is upsetting and sad and our prayers are with the families affected and the community.  We know that OSHA and others will investigate and determine what went wrong and hopefully we will learn from whatever mistakes caused this accident.  However, rather than tweet a concern, Alexandria Ocasio-Cortez tweeted out, with a picture of the explosion, "This was Philadephia after an oil refinery exploded this morning."  Once again, Democrats are distorting the truth.  This was "not all of Philadephia".  If you are to believe the distorted pictures the Representative presented, then you will think that Philadephia blew up yesterday morning and was perhaps destroyed by the terrible accident.  In truth, there was damage to the plant, the area is safe, and four people lost their lives.  Alexandra would have you believe the entire city of Philadephia was destroyed! 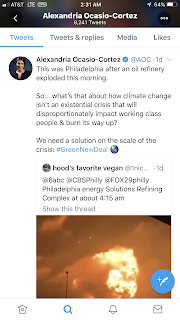 The next example we have comes from Democrat Presidential hopeful Eric Swalwell - you may remember this fine young Democrat as the man who wanted to "Nuke" Americans to end an uprising should the government try to take away guys and destroy the 2nd Amendment.   Nonetheless, Swalwell has not learned any lessons from his tweets and yesterday he tweeted the statement, "If you're Hispanic, there's nothing realDonaldTrump wont do to break your family, cage your children, or erase your existence with a weaponized census." Wow, so according to Mr. Swalwell and his well-learned Democrat distortions and lies, every single Hispanic person in the United States needs to be afraid of the government!  According to Swalwell "all" Hispanics need to be concerned!  This means that the Hispanic descendant who was born in the United States and is a citizen needs to be concerned.  The legal immigrants who have come to the United States obtained his or her citizenship needs to be concerned.  Naturally, Swalwell is simply a Democrat mouthpiece of lies and deceptions. 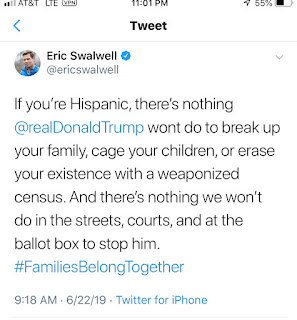 Perhaps the only positive thing that can be gained from the Democrats continued attachment to lies and distortions is that it is a sign that they have no platform to stand on without the lies.   Psychological Projection usually means the person or group has no defense for his or her positions and simply decides to "project" his or her issue, problems, or shortcomings off to someone else.  Make no mistake, the Democrat Party has been using these tactics for years.  Now they are teaching a new generation of Democrats just how it's done.

If you are to believe the statements made by Democrats, then you will think that all Republicans are “anti-women”, “wanting to control women,” and “have no respect for women.”  That is the propaganda that Democrats have pushed, promoted and advertised to the hilt from the Washington all the way down to counties and cities across the nation.  Respect for women, after all, and according to the Democrats, is the cornerstone of their party…if you believe their outright lies and propaganda.  If on the other hand, you look at the number of Republican women in power from the county level, up through the states and even in the White House, you’ll find Republicans not only support and encourage women, Republicans elect and promote women at astonishingly high rates.  Don’t believe it, or want proof…look no further than yesterday’s hearings.

Hope Hicks, often referred to as Ms. Hicks, testified before Democrat-controlled House Judiciary Committee or perhaps a better name would be “The Tax Payer Funded, Democrat-Centered Witch Hunt Arm of the United States Government,” but hey, to each his own right?  Anyway, Ms. Hicks went to testify about God only knows what, because most of us could not get past the fact that Representative Jerry Nadler seemed to be living in some sort of Twilight Zone episode of “Dazed and Confused” as he referred to Ms. Hicks not once, but three times, as “Ms. Lewandowski.”    Now apparently Ms. Hicks may have known, dated, or went out with Mr. Lewandowski, but let’s be perfectly clear here – if Representative Nadler was “dazed and confused,” and thought that perhaps Ms. Hicks had married Lewandowski, wouldn’t he have referred to her as “Mrs. Lewandowski” instead of “Ms.”?

As the day went by and upon the third time that Representative Nadler called Ms. Hicks by the wrong name, she finally corrected him and said, “My name is Ms. Hicks”.  Now let’s be perfectly clear about one thing…Mr. Nadler is not stupid.  He knew who was going to testify (He had papers with names on them right in front of him), his remark later of “I made a mistake” is just a blatant lie to cover up to his remarks.  Nadler knew perfectly well that Ms. Hicks was not Ms. Lewandowski.

Hope Hicks, a Republican woman, was the White House Communications Director before the age of 30, she is an executive at a major media corporation, and she  is a graduate of Southern Methodist University.  Ms. Hicks (see I know her name) rose up through the Trump campaign to become press secretary and eventually the Communications Director for the Trump 2016 Campaign.  In simple terms, Ms. Hicks is a shining example of a young Republican woman on the rise in America, and that is something Jerry Nadler does not like –

Jerry Nadler did nothing less than assume a sexist and male chauvinistic role by calling Ms. Hicks the wrong name.  He implied that she was someone else first, that her name was not important, and that her positions were not important enough for him to call her by her right name.  However, more importantly, and so much in the face of the Democrat “Pro-Women” lies, Nadler belittled Ms. Hicks as a witness, as a woman, as a professional, and as a citizen.  Jerry Nadler showed that he thinks very little of women by his sexist and chauvinistic actions and that he has outright disregard for something as simple as calling Ms. Hicks by her name.

Jerry Nadler immediately was hit with social media.  Not surprisingly, he was called names from “Sexist” to “Fat and Nasty” and some others that simply should not be repeated here.  Nadler tried to play it off as a mistake….no, Representative Nadler, it was no mistake.  You disrespected a witness before your committee, and perhaps more telling, you showed your true views and the views of the party you represent.  So, the next time someone tells you how supportive of women the Democrat Party is, maybe you should simply respond with “Nadler Not.”