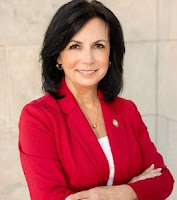 When Cathy Hardin-Harrison was elected as the County Judge for Miller County, Arkansas in the 2018 election, she started a long line of first in Arkansas.  Cathy was the first Republican female in the state's history elected to the position of County Judge.  She was also the first female elected as County Judge in Miller County.  Cathy had already served as the County Tax Collector and served on her local Republican Committee as the Treasurer and State Committeewoman for several terms when she was sworn in as County Judge.  She continues to serve as the Republican State Committeewoman for Miller County at this time.  Now she has once again accomplished another first.

On December 12, 2019, The Supreme Court of Arkansas appointed several new members to the Committee on Security and Emergency Preparedness.  The appointments include mayors, county officials, sheriffs, and others from around the state of Arkansas who will serve a term on the committee until September 30, 2022.  Among the appointees is the name "Cathy Hardin Harrison, Miller County of Texarkana."  With this appointment, Cathy once again has pushed the envelope of firsts.  She is now the first female County Judge, and the first female Republican County Judge to be appointed to the committee.

According to Cathy, the committee meets two to three times a year with a concentration on security and emergency preparedness for all the counties in Arkansas.  Cathy is already gathering information and input from others as she prepares for her first meeting.

We congratulate Cathy on her appointment.  It should also be noted that Cathy continues to debunk the Democrat's old lies about how Republicans do not like women.  Many in the Democrat Party would have you believe Republicans try to hold women back.  No, my dear Democrat friends, we do not hold Republican women back.  We promote them, support them, and help elect qualified, Republican women in Miller County, across Arkansas and across the nation.  Besides that, anyone that knows a Republican woman like Cathy would already know, there isn't anyone able to or going to hold them back.  Republican women are strong, independent, and filled with a conservative love and push for this country more powerful than you can imagine.  My advice to any Democrats when Republican women are moving, get out of the way.

Posted by That Writer at Wednesday, January 29, 2020 No comments: