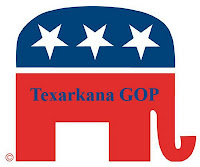 The 2022 election cycle is winding down to an end in Arkansas and specifically in Miller County. The county is seeing some of the largest Republican wins since Reconstruction. As of this writing, the county has a confirmed 32 Republicans going into office on a county and state level representing Miller County. There is one race, JP 7 which will have to be declared vacant and appointed. One Democrat, JP 3, was a elected.

With 32 Republicans and 1 Democrat representing the county, it is clearly a red day for Miller County. For state representation, Senator Jimmy Hickey remained in his seat against an independent challenger. Representatives Lane Jean and Carol Dalby both easily held off Libertarian candidates and remained in their respective seats. Representative Danny Watson did not have an opponent in the general election.

Justice of the Peace 1 had the widow of the former candidate John Wilson, continuing his run. Judy Wilson was able to secure the position and take the seat from independent Eric Darden. Unfortunately, Ethan Eppinette was unable to win against Rick Hall. Hall won the seat and will be the only Democrat on the court.

With one loss on the board, the Republican Committee of Miller County has made a significant and important impact on county politics.
Posted by That Writer at Tuesday, November 08, 2022 No comments: 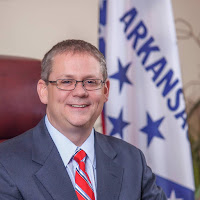 Arkansas Secretary of State John Thurston was the keynote speaker of the Miller County Republican Committee's 2022 Lincoln Day Dinner. In the process of providing the keynote, Thurston reminded the committee of the core of the Republican Party, but more than that, he reminded them of the core of the nation. Reaching, in excellent fashion, beyond the bounds of party politics, Thurston stressed the nation's need to return our focus to God.

Thurston told the committee that America being great is not simply about laws, rules, politicians, or even one party. In a resounding reminder, Thurston stressed how no one politician makes policy or law. According to Thurston, no one politician, regardless of party, can make the changes needed to keep America on a positive path. It requires many, as designed by the founding fathers, to point the nation onto the path of righteousness.

Throughout the speech, Thurston came back time-and-time again to one key point. He stressed that without putting God and prayer for intervention and guidance, no nation can continue to be great. In his closing remarks, Thurston not only stressed the need for prayer, but he provided a closing prayer for the committee, state, and nation.

Republicans are used to speeches promoting party policies, pointing out the errors of our opponents, or even pushing for valid and fair elections. Republicans do not need a reminder about the platform or the politics of daily life. Republicans need the reminder that Thurston hammered home with the guidance of a man speaking openly to people, not just Republican people, but all people, that God must be the guiding center for our nation. By rising above, Thurston not only shined as the keynote speaker, but he mapped out a path to continue the greatness that has made America a cornerstone and the object of envy to the rest of the world.


(Picture from https://www.sos.arkansas.gov/about-the-office/johns-biography/
Posted by That Writer at Wednesday, October 12, 2022 No comments: 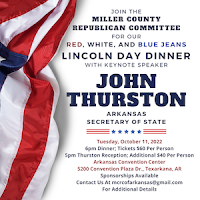 Texarkana, AR : The Miller County Republican Committee will host a Lincoln Day Dinner at the Texarkana Arkansas Convention Center on October 11. The theme for this year’s dinner is "Red, White, and Blue Jeans," and the keynote speaker will be Arkansas Secretary of State John Thurston.

The event will start at 6 p.m. and tickets may be purchased online for $60 each. A reception will be held with photo opportunities and interactions for an additional $40 per person at 5 p.m. Sponsorships are still available for area businesses, groups or individuals. Email mcrcofarkansas@gmail.com for further details.

Tickets for the event may be purchased online through the committee website at Texarkana-millercountygop.com or through the Facebook page at facebook.com/millercountyrepublican The event is open to the public and features a casual dress of blue jeans. All tickets must be purchased in advance. No tickets will be sold at the door. You may also call 832-652-8012 for additional information.
Posted by That Writer at Thursday, September 08, 2022 No comments: 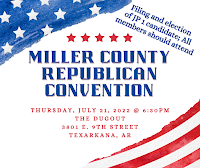 With the passing of Republican nominee John Wilson for Justice of the Peace 1, the Miller County Republican Committee was faced with a vacancy for the November primary. His untimely death created a situation rarely dealt with in Miller County; however, there are laws in place for just such an incident.

Below is a brief review of what transpired after Mr. Wilson's death:

1. Diana Lowe,the committee chair, immediately contacted the elections commission, Secretary of State and county. She also contacted the state party and several leaders within the party. She received specific instructions and had to act quickly.

4. The committee must elect a new candidate for the vacancy.

6. If there is more than one person filing, the committee at convention must vote.

7. If only one person files, the committee votes to certify that person as the Miller County Republican Committee candidate for 2022 JP 1.

CLARIFICATION: AFTER THIS ARTICLE WAS PUT OUT, I WAS INFORMED THAT THIS INFORMATION IS BEING DISPUTED. I WILL PROVIDE AN UPDATE WHEN I HAVE ONE.

Jeffery Page – is on the ballot but cannot be elected to the position; if he wins, the position will be vacant.

Roy Pitt – must win the runoff election to ensure that the choice of JP 7 remains with the voters of that district. If he does not win, the Governor of Arkansas must appoint someone. 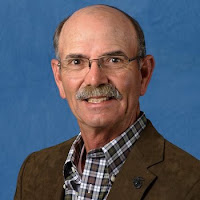 The runoff for Justice of the Peace District 7 presents a unique and unusual choice for the voters of that district in Miller County. As most people already know, the position had three Republicans file. Jeffery Page, Roy Pitt, and James Syler all presented great choices for the district. But unfortunately, there was no clear winner on election night, and now a runoff is scheduled for Page and Pitt.

The problem for voters in the district is that Page withdrew as a candidate before the election. This left Pitt and Syler, but the ballots had already been printed. Arkansas law required the ballots to go to voters as printed. The result is a runoff between Pitt and Page with a pending result that could remove the right of choice from the people living in district 7.

If the voters in the district vote for Page and he wins the nomination, then the position is declared vacant. This means there is no Democrat candidate on the ballot, and there will be no Republican on the ballot. If the position is declared vacant, the choice of a Justice of the Peace for District 7 falls to the Governor of Arkansas. This would mean that voters would not select their representative, but instead, the Governor would choose one living in the district.

For the voters to have their own elected Justice of the Peace, Republican voters in the district must get behind and vote for Roy Pitt. It would be beneficial for both Syler and Page to endorse Pitt and support his campaign. The county committee and the people of District 7 should get behind Pitt and ensure he wins the runoff election.
Posted by That Writer at Saturday, May 28, 2022 No comments: