Trump to Biden, and The Changing American Media 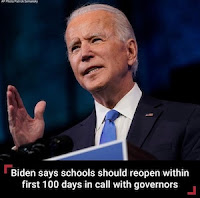 Donald Trump encouraged schools to reopen as quickly as possible, and the media jumped on it.  The American media accused Trump of putting kids at risk in sports events and classrooms.  While Republican, Democrat, and Independent parents of school-age kids made their choices for the 2020-2021 school year, President Trump maintained we need to return to school.  The media said Trump did not care about the COVID-19 pandemic.  One media outlet even stated that Trump should let Barron go to school in this pandemic. Then came the election, and with it...change.

Now, Joe Biden states that he wants schools to open back up across America within his first 100 days in office.  The media? =Well, that's just a swell idea!  That's right, the same media that hammered President Trump for months because he was putting the kids in danger is now supporting the Biden plan to have the kids back in school within 100 days.

While President Trump encouraged schools to get back to normal, he did not force them to do so with government interference.  Trump allowed each state, each school district to address the needs in their area.  Some schools went completely virtual, some went part-time, and others offered the choice to have virtual or on-site classes.  Trump maintained freedom of choice by stopping potential government interference.  In return, he received - ridicule, mocking, and outright assault from the American media.

Now Biden is coming along and pretty much saying the same thing Trump said that schools should open...however, while the American media is lavishing praise on Biden for his idea, they are failing to tell you one thing.  Biden is not offering an option.  He has been on the phone with governors and is telling them schools will open within the first 100 days of his Presidency.

So, what does this mean for American students?  Potentially a lot, but again, the wonderful change in the tide seen in the American media fails to tell you everything.  If you look closely, Biden will be President on January 20, 21.  100 days after Biden is President will be April 30.  The next potential school day will be May 3, 2021.  Most schools in the country end their school year in mid to late May.

If Biden orders districts to truly open up in 100 days, imagine the mass confusion of returning kids to classrooms for a two to four week period.  Imagine the crisis of transferring from an online learning environment back to classrooms.  Imagine trying to coordinate for many what will essentially be the first day of school.  Perhaps more importantly, imagine the COVID-19 exposure that will be forced on millions of American kids against their parent's wishes.  Millions of those children will not have had an opportunity to receive the vaccine by May.  Further, millions may simply not want to "experimental" vaccine until later.

Biden's return to school within the first 100 days is nothing more than a disaster plan.  School districts across the nation will become Superspreaders of COVID.  Our country will go into the summer months with the highest rate of COVID cases in children the nation has ever seen.

Trump encouraged schools to reopen and left it up to each state and district.  Biden will propel children, your children, and grand-children, into a new wave of COVID exposure of unheard-of disastrous potential.  The media?  Well, what can we say...It's "Biden Time," and the American media is once again in love...so they are not going to tell you of the potential disaster Biden is promoting.  Yes, the tide of the American media has certainly changed.