Don't Ever Count Me Out 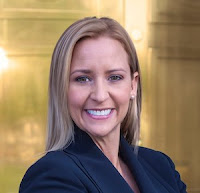 Rutledge, a Republican woman running what some would consider an uphill battle for Arkansas Governor, should never be counted out.  At an introduction meeting to the Miller County Republican Committee, Leslie Rutledge informed the committee she is used to tough battles, and she should not be counted out early.

During her presentation, Rutledge informed the committee that in her first run for Attorney General of Arkansas, there was a three-way Republican Primary race.  Recent polling showed Rutledge at 9% or dead last behind the other two candidates.  Never one to give up, Rutledge continued to campaign door-to-door and across the state.   She continued to push her message out to the people of the state.  On election night, that "Never Give Up" spirit propelled her to the number one position with 47% of the vote.  Although she had a runoff, she won the race and went on to win the general election as well.  Since that time, Leslie Rutledge has served as Arkansas's first Republican female Attorney General.

Now Rutledge has turned her attention to the Governor's office of Arkansas.  She will be in a tight primary with a well-known national figure and friend of hers, Huckabee-Sanders.  During the committee meeting, one member asked her if she thought the race would be a good one, and with a straightforward, no-nonsense answer, Rutledge replied, "Well, that's the plan.  I don't plan to lose."

Perhaps Leslie Rutledge's entire campaign can be summed up in words she used when addressing the committee.  Rutledge said, "Don't ever count me out."  The words were direct and honest.  If Arkansas has learned one thing from the years of Rutledge as Attorney General, it is that she is a fighter that will fight until the last bell has run.  Rutledge has a plan, a desire to serve Arkansas, and a campaign pushing to see a bright and positive future for the state.  If she goes down in the primaries, it certainly will not be for lack of fight and Arkansas spirit.